The QHY 268C - Photographic version is one of the most advanced colour camera for astrophotography. It installs the Sony IMX571, a high performance back illuminated cooled colour sensor with true 16-bit A/D. This translates to a dynamic range of 14 stops for vibrant and natural colours, even in faint or dark nebulae. The pixels have a size of 3.8 µm, ideal for telescopes with different focal lengths. The QHY268C comes with all adapters necessary to reach 55mm backfocus, required by most correctors/reducers. Unlike DSLRs, the QHY 268C offers true RAW image output that only records the signal without artefacts. Standard DSLRs have the RAW output option but the file is altered with noise reduction and hot pixel removal, undermining the maximum post processing capabilities and final quality of the image.


The camera has a two-stage TEC cooling system that brings the temperature of the sensor 35C° below ambient for low noise imaging, even in warm climates. The dark current at -20°C is only 0.0005 electron/pixels. In addition, QHYCCD employs a unique thermal noise control technology to reduce CMOS sensor noise to a very low value without affecting the integrity of the raw image. The QHYCCD proprietary technology produces a much better noise reduction than any other astronomy camera in the market. The QHY 268C employs a full anti-dew technology for both CMOS sensor cover glass and the optical window to avoid condensation or ice crystal in the camera.

The 1GB DDR II memory buffer facilitates the download of images to the computer, especially when USB traffic is high, the writing speed of your computer is slow or occupied with other processes.

In order to avoid halos around bright stars, the QHY 268C has an AR coated optical window on both sides rather than the common IR/UV cut coating. Also, the protection glass of the sensor is AR coated to maximize light transmission and minimize internal reflections. For a better RGB colour balance, it is recommended to use a UV/IR cut filter.

Every QHY 268C camera is carefully calibrated with a high-precision axis measurement device. Orthogonal sensor placement in the camera body is guaranteed to be flat to the image plane with a precision better than +/-20µm across the sensor edge to edge. This is an enormous advantage especially in fast telescopes such as F/2.8-F/4 astrographs which are very sensitive to tilted sensors.

The QHY 268C has zero amplifier glow no matter how long the exposure is.

QHY has designed a number of adapter kits for the 268C: Several features of this camera I liked.
My last camera suffered badly from lens fogging and freezing.
This camera has a heater demister and desiccant tube to dry it out should it ever need to be dried out.
This camera has APS-C size sensor. 6280*4210 at 16 bit.
Zero Amp Glow with 3 capture Modes. I have tried Mode #1 (High Gain) so far on M42 Orion with G=56 120 sec subs and G=0 at 10 sec subs to combine over 3 nights. The files are very large so be aware 10 sec subs fill a hard drive fast and taked PixInSight a while to Weight Batch process.
I found when using qwith a 54mm ZWO 2" filter draw and supplied spacer I achieved back focus first try.
Camera is easy to detach and fit back secure with 3 knurled knobs that are loosened and tightened. Can be easy to manual orientate as well. You are given a standard power 2.1mm cable/plug or a 240 AC to 12vdc supply (I found I needed the QHY AC/DC supply).
All I need now is Good cloudless nights to try more modes and features.
Barry

The camera arrived a few weeks ago and despite Melbourne’s fickle weather I’ve managed a couple of hours with it.

Am I happy with it so far, Yes.

I chose the QHY over other brands primarily as I’ve had 2 of them before, with only minor issues occurring.

Out of the box, I had previously installed QHYs package for capture etc, all I had to do was plug it in and it worked flawlessly.

The download speed with usb3 is phenomenal compared to my old cameras, one second and it’s ready to go.

The longest subs I have done so far is 5 minutes, and your brightest stars will definitely fill up the wells in my chosen mode,

Every frame will have the green cast commonly seen with OSC cameras, but easily removed in processing.

With modern processing programs I could almost say that flats, and dark frames are a thing of the past if your chip and train is clean, but out of habit I still do them.

The CMOS chips seem to be very clean, but aside from hot pixels, noise seems much more random, again processing techniques take care of this. There is ZERO amp glow, even when stretched to the extreme.

I found that Beta Centauri did cause a minor reflection from the interaction with a uv/ir filter, this was during testing phase to get back focus sorted. I’m assuming a reflection from the cover to filter and back. I haven’t seen anything on dimmer stars.

A few short exposures, 8x5min, clearly resolved M83 with a decent amount of color, I’m looking forward to doing some serious projects with this camera.

I have purchased a filter drawer, with this setup, as my flattener only allows 46mm backfocus, there is no room for an off axis guider, I already have other filters which I will try in due course. I have yet to see any light leakage through anything.

The three screws with the adapter allow rotation for framing, even though my scope has a rotating ring, I may well use this instead, as it always pays to give the camera a wiggle before you start imaging in case something has come loose.

My limited use so far is proving promising, the resolution is superb, I have yet to see any banding on dark frames, just a speckling of random noise mostly.

I had been waiting for some years for CMOS to come of age, I have had the opportunity to process some images from high end mono CCD cameras, whilst it’s not quite there yet, it’s very close, and for considerably less money.

Color vs Mono, mono will always win in a comparison test of the same chip, but with the increase of sensitivity from older cameras, plus small pixel size ( I get 4 pixels in the same space as my old qhy8) an upgrade from an old camera is likely to be some improvement.

Melbourne is notorious for cloudy skies, the convenience of a OSC is hard to argue if you’re time limited, plus objects like comets really don’t lend themselves to mono.

Finally.... happy with the purchase, the communication from Testar was good, with prompt delivery, I will no doubt be making other purchases in the future. 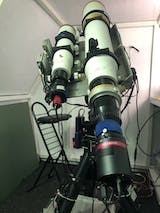