The ZWO ASI6200MM PRO is a high resolution camera with a full-frame back-illuminated 16-bit Sony IMX455 sensor, featuring a QE up to 80%. The ASI6200MM Pro is the first ZWO camera with a 16bit ADC that can achieve a dynamic range output of 14 stops. This improves the image sharpness and contrast significantly and the color shades are smoother and more natural. The USB 3.0 Port provides 5Gbps bandwidth and lets the camera run at 9fps at full resolution. The 2 stages TEC cooling system allows a ΔT of 35°C below air temperature. The cooling system requires an external power supply of 12V at 3-5A with a 2.1×5.5 mm connector (positive tip). The ASI 6200MM can be powered with a standard lead battery or a DC source between 9-15V. The dew heater avoids the problem of dew condensation on the optical window of the sensor. The heater can be turned off via software.

Traditional CMOS sensors produce a weak infrared light source that is often seen in the corner of uncalibrated images as bright glow. The ASI 6200 uses the zero amp glow circuits that avert this artefact in your images. The best solution to achieve a back focus of 55mm Whether it is used with narrowband SHO filters or with just a Luminance source with the 6200MC OSC this camera delivers every time. A full frame sensor produces 120Mb sub frames that allow sooo much freedom with framing and cropping. The cooled sensor produces soo little noise, I really only need dark frames with upwards of 300 sec subframes. It's not cheap but worth going without food a for a week or 2 - a great full frame mono astro camera. 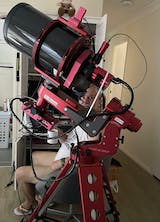